On my recent Rick Dom II I used the rolled sticky-tack masking method. The idea is that the rolled edge of the sticky tack gives you a slightly soft edge on your camouflage that simulates a to-scale overspray patterns from a paint gun. Itâ€™s very common among airplane modelers. Since I donâ€™t see this camouflage technique used much in the world of Gunpla, I decided to make a tutorial.

Aircraft modelers often use sticky tack to create camouflage patterns on their airplanes. One method is to blow up the instruction manual to match the size of the model and cut out the camouflage pattern. They put sticky-tack on the back of it and stick it to the model. The sticky-tack raises the edge of the paper mask and allows some of the spray to slip under it and create a soft edge to the mask that simulates to-scale overspray from a real-world camouflage painting process.

You can create the same effect even if you donâ€™t have an instruction manual with a camouflage pattern. Just roll up strips of sticky-tack (roll it on a table or piece of tile from home depot) and place the rolled strips on your model in a camouflage pattern. Since the rolled sticky-tack has a rounded edge, it also makes a slightly soft edge to the camouflage as long as you donâ€™t press it down too hard. An advantage of this no-paper technique is that you can wrap the sticky-tack all around the model. It would be hard to wrap paper around the various contours and arms and legs of a robot.

Now you need to mask off the areas you donâ€™t want to spray. For this, I sued Parafilm. You can purchase Parafilm from MicroMark. Itâ€™s a wax-coated plastic. It works kind of like Saran Wrap in the sense that you can stretch it around stuff and it kind of sticks by itself, but Parafilm is thicker and a lot less likely to get all stuck on itself. Cut out a piece of parafilm about Â¾ the size of the area you want to cover and then stretch out the Parafilm until itâ€™s thin and pliable.

Place the Parafilm over the area you donâ€™t want to paint. You can stretch it a bit more in the process (but not so much it pulls the stick-tack off) and wrap it around corners. Where you have to go around something and the Parafilm comes around to itself again, you can seal up the seam with more sticky-tack. You can also sticky tack places where sharp edges on the models could (or did) poke through the Parafilm, or where the Parafilm had to be folded to get around a curve.

In the above picture, I photocopied my decals and stuck the copies to my model using sticky-tack. I usually had to cut the decal where it went across the line of the camouflage. The reason Iâ€™m doing this is that the brown color Iâ€™m spraying over the green is supposed to represent field-applied camouflage to a Dom that already had markings on it. Real-world field-applied camouflage often skirts around existing markings to save the person applying the camouflage from having to repaint national insignias and squadron markings, etcâ€¦

Then you have to remove the excess Parafilm. I used my small scissors for this. You can leave a little bit of overhang, because you can just smash it onto the sticky-tack.

Next you airbrush the camouflage color. You want to try to spray the paint perpendicular to the surface of the model. You donâ€™t want to paint into the crevice where the sticky-tack meets the surface of the model. The goal here is that the spray pattern hits the sticky-tack at the fat part and then diffuses slightly into the crevice giving you a soft edge.

If you look in the picture, the â€œback sideâ€ of the sticky tack is not painted. This is how you get the soft edged effect. Once the paint is dry enough to handle safely, pull the sticky-tack off the model. Ta-da! 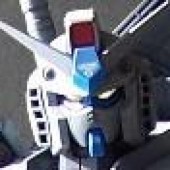 I build Gunpla. And Mecha. And Military stuff.

How to fix seams